Originally posted on May 14.

US & Russia are on the same team in Syria & “Geneva” is the cover. 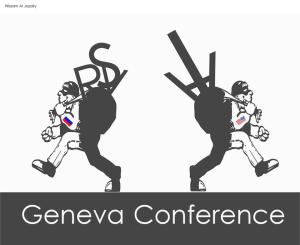 Both sides are anti-revolution, and working towards a managed outcome grounded in their mutually beneficial interests. They have been working hard over the past year to slow the progress of the revolution. How? Quite simply, for 2+ years:

So-called “Friends” of the revolution starve the movement through grossly limiting funding despite public claims to the contrary – to the political opposition, fighters & general population.

So-called “Friends” of the revolution amplify Assad narratives from overstating “minority rights” to parroting fears of “what comes after” to justify paralysis.

Real friends of Assad connect to, choreograph and amplify the same Assad line from day 1 of an “imperialist-islamist-zionist” conspiracy.