I had the opportunity this morning to discuss the Syran revolution on the “Up with Chris Hayes” show on MSNBC.

Sharing a panel with Amy Goodman from Democracy Now, Br. General Akil Hashem and retired colonel Jack Jacobs (MSNBC Commentator), it was a very productive conversation about the realities of the revolution, popular resistance, along with whats happening next in both Damascus and Aleppo.

Below is the main article, and links to additional video segments:

National Alliance for Syria’s Al-Jijakli on a decentralized revolution.

On Sunday’s Up w/ Chris Hayes, host Chris Hayes pressed the co-founder of the National Alliance for Syria on what would happen if Syria’s oppressive Assad regime fell to rebel forces today. The answer seems to be: It’s complicated.

The National Alliance for Syria’s Sarab Al-Jijakli painted a picture of the Syrian revolution that was radically decentralized. Unlike the Libyan rebels, who established a transitional council well before the death of Libyan dictator Muammar Gaddafi, the Syrian rebels don’t appear to have much in the way of a formal hierarchy.

“The resistance is grounded in local organizing,” said Al-Jijakli. “It’s grounded in the local coordinating committees, the activists on the ground, who have been pushing from day one a civil resistance agenda that has been supplemented as people have found their role in the revolution.”

“These are the national leaders,” he went on. “The Syrians, local up, who have been from day one coordinating the activities of this revolution.”

MSNBC contributor and retired colonel Jack Jacobs expressed skepticism. “The real question is, is there one or more national leaders who’s actually going to be able to exert leadership and formulate, form, a national government. … If the answer to that is no, then if the United States or anybody else supports the Free Syrian Army, we don’t know what the result will be.”

“We have to give time for the revolution to bear fruit,” Jijakli replied. “You have to understand that after 40 years, this regime has been in power, they have done everything in their power to basically deconstruct civil society. We we have learned in the past year and a half is that the Syrian people are reclaiming that.” 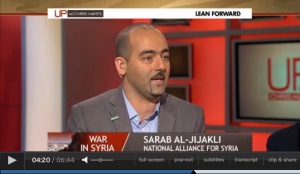 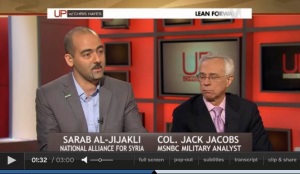 One thought on “Syria: A Decentralized Revolution with “Up w/ Chris Hayes” on MSNBC”